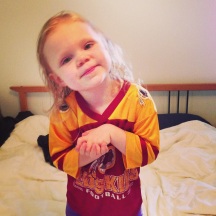 Don’t let that angelic smile fool you.  That kid has had it out for me since 6pm last night.  And I’m pretty sure that I performed some kind of exorcism this morning during the 50 (FIF-TY) minutes it took us to get from the house to her school.  A trip that normally takes 10 minutes, tops.  TOPS!

On the drive home yesterday, she was admittedly tired.  With slow cooker beef stew a-cookin’, dinner was done by 6:10pm.  (Ask me one more time if I miss living in DC…).  So we hoped for an early turn-in for RR, and when she and I went to put her pajamas on, her tiredness turned into CRAZY LUNATIC (flailing and all), where she clocked me in the face.  We don’t do the “time-out” thing, so I knelt down to her and sternly said that her actions were not respectful.  Oh, but this was all too late.

So she tried to compose herself while we did the other bedtime routines.  Like, washing hands and brushing teeth.  Which was going smoothly until I only washed my mouth out twice instead of three times (we brush together… it’s way easier to explain).  I left her in her room to get her tantrum out of her system until she was sobbing, crying calling for me.  But it wasn’t “mama.”  Oh no.  From her room, she’s screaming “I need DEBRA!!!”

Oh and then this went on until finally she calmed down enough for bedtime stories and bedtime itself.  Phew!

After three unexplained (and not typical) wake-ups in the night, she held her shit together until right when my wife left to ride her bike to work.  Oh how I envisioned RR and me sitting at the breakfast table, me with my coffee, her with her cereal.  But something was amiss.  Pieces came together like… she wanted to ride WITH mama to work, and no she didn’t want oatmeal, but yes she did, but NO NO anything but oatmeal.  Exhausted, we did finally make it to the breakfast table.  Me with my eggs and banana, and her with her not-wanted-anymore oatmeal and a “cold egg” (hard-boiled).

There was much disagreement about whether or not breakfast was actually over.  I said yes (looking at the clock) and she bloody lost her mind.  So I took her mind-losing-self to the front door, and we attempted to leave the house.  But then there was some shit about her needing to open the screen door?  A certain way?  I found myself being directed to stand 20 feet away from her while she tried to figure out herself how she wanted to open the door.   Something that is still a mystery, since after waiting for five. full. minutes.  I picked her up and walked her out of the house.

And then this happened:

So I carried her down the front stairs (flailing, kicking, screaming) and open the door to the car. We all know screaming tantrum children cannot be reasoned with. They can, however, be put in the back seat of a car with the doors closed, so that at least the screaming is muffled, and it decreases the chances that the neighbors will call the police. With her one step closer to school, I loaded the rest of today’s items in the back of the car (my work bag, her lunch, her 8 changes of clothes for just today… ask me how potty training is going), all while hearing her shouting when I’d open the hatch.

Twenty minutes later, I wrestled (actually wrestled!) her into her seat and buckled her in. I broke a sweat even.

On the drive, she continued to cry, telling me she needed to go back to the house. Presumably to open and close the screen door the right way. However that is, no one may ever know.  We took another twenty minutes in the parking lot, with me waiting for her to get out of the car, and then sitting on the curb in the parking lot having a gentle and sane discussion about walking through the path to the school, all in between her stifled sobs.  We nodded and said good morning to the parents and kids passing by.  She reluctantly received compliments on her sweater-poncho.

We walked to the front door, where I asked RR to explain to the Director why she wasn’t carrying her lunchbox (which is kind of a big deal).  RR explained that she was crying, and she wanted to go home.  The Director then negotiated with RR a bit about how she has to go to school and I have to go to work, and all was eventually diffused.

Needless to say, as soon as RR walked in her classroom door, I was out of there like a rocket.

I could Google “tantruming 3 year old” a million times (with a million different outcomes, explanations, and coping techniques), but the fact of the matter is… the kid’s had a long week.  Shit, we’ve ALL had a long week.  She’s in a new place with new teachers and friends.  Expectations of her have changed, potty training is hard, learning how to be self-sufficient is HARD, and an overall break in routine has presented itself as stress in all three of us.  Time will help.  Routine will help.  But in the meantime, I’m hopeful that my neighbors haven’t called the police on us yet.

Please laugh at my expense, and send healing thoughts!  😉

Posted on September 5, 2013, in everyday. Bookmark the permalink. 16 Comments.